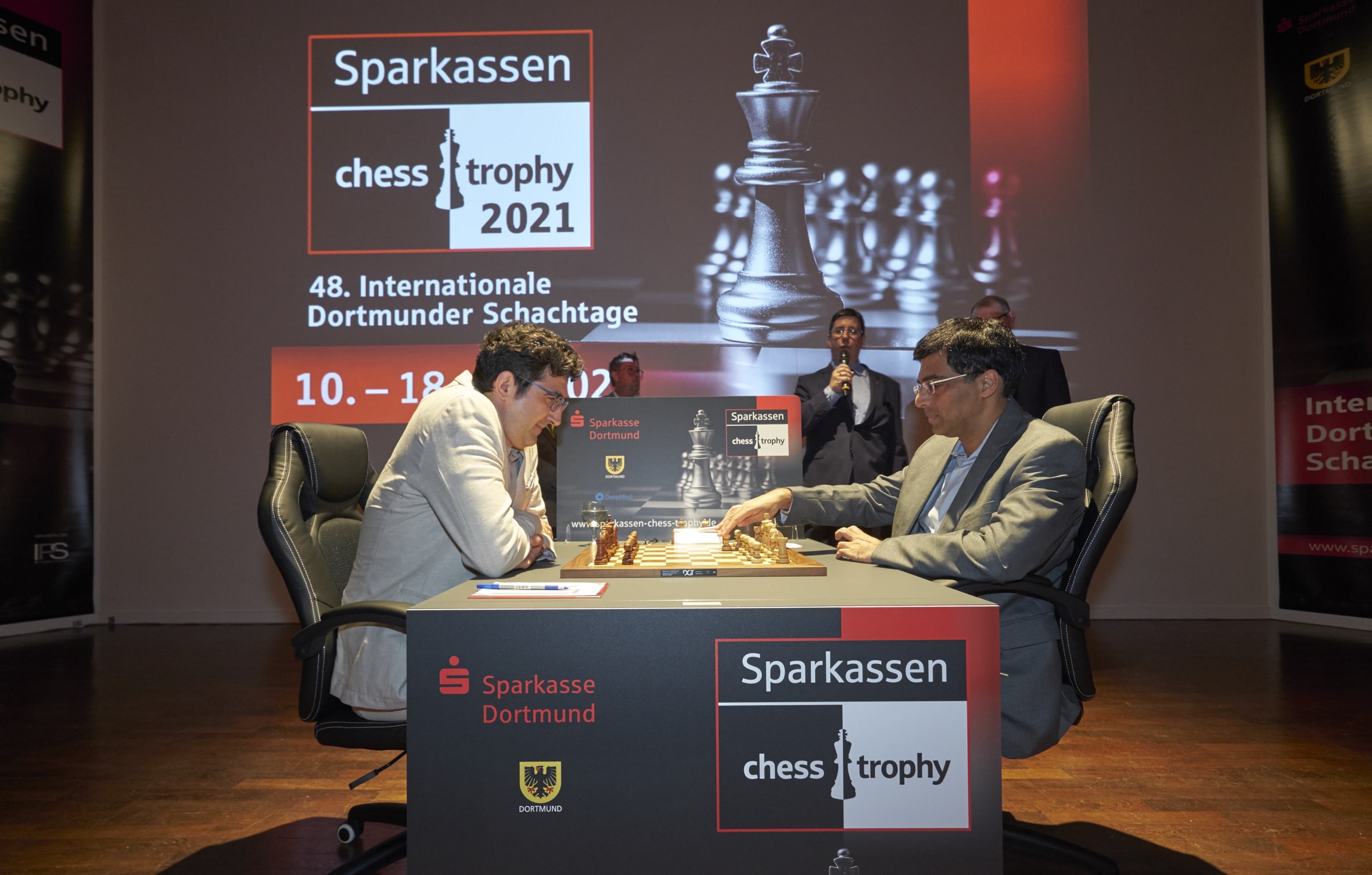 Hensel then reported on the 49th International Dortmund Chess Days.

„We have designed seven interesting chess competitions, which underlines our claim here in Dortmund. Namely, to design a chess festival and return to what we had in Dortmund in the 1990s.“

„We're running towards a full house and I'm so really looking forward to it kicking off again with an audience and lots of chess players."

The seven tournaments include the two grandmaster tournaments NC World Masters and Deutschland Grand Prix, the two Sparkassen Open for all chess enthusiasts, the Sparkassen NC Online Open and two Sportland NRW Cups as closed tournaments for junior players of the region.

Blübaum starts with a black game against Luke McShane

Tournament Director Andreas Jagodzinsky made the draw for the two grandmaster tournaments. In fact, Vladimir Kramnik has a chance for revenge in the NC World Masters in the first round: He will meet last year's winner Viswanathan Anand on 18 July with the white pieces. The winner of the NC Online Open 2021 Krishnan Sasikiran will start with white against the German top player Daniel Fridman. The tournament will be played double round robin, each against the other. After the first part, there will be a day off before the second part starts on Friday, 22 July.

Seven top grandmasters will compete in the Deutschland Grand Prix. The tournament starts on 17 July with the following pairings:

One participant per round is deliberately free of play, because he will commentate the games together with Artur Jussupow and Fiona Steil-Antoni live for the online broadcast and give chess fans worldwide an insight into his thoughts.

Matthias Blübaum sees good match practice in the Deutschland Grand Prix before the Chess Olympiad in India, which starts shortly after the International Dortmund Chess Days.

„I will try to play as far at the top as possible. But I think it's hard to predict because it's a very balanced field.“

News in the Sparkassen Open

Andreas Jagodzinsky also reported on a change in the Sparkassen NC Online Open. This year the preliminary rounds will be played at different times to give players worldwide the opportunity to comfortably be part of the Sparkassen Chess Trophy 2022.

About the Sparkassen A Open starting on 16 July in the Congress Centre of the Westfalenhallen Dortmund Jagodzinsky says:

„In the A Open we want to give the possibility that there are not only purely theoretical chances for an IM norm, but tangible and practical chances for IM and GM norms. We already have some international title holders, also grandmasters with a fide rating over 2600.“

The Managing Director of Initiative Pro Schach e.V. Stefan Koth is also particularly pleased about the festival character with all tournaments under one roof and the digitalisation of the event with an increasing number of live broadcasts of games from closed and open tournaments and its own YouTube channel "Dortmund Chess Days".