On move 40 Viswanathan Anand had the chance to win the match in the No Castling World Masters of the Sparkassen Chess Trophy: Instead of 40.Sf4? both players see some possibilities to win the game directly, as they explain in the analysis video:

The third game of the duel started with similar patterns as in encounter number 1: Anand opened with 1.c4, Kramnik moved his h-pawn early with 6...h5!? But this time the black starting position was better than in the first game of the match and the middlegame was well playable. But the game slipped away from the 14th World Chess Champion, so that the Indian got the aforementioned chances to win. Kramnik survived these moments and after 5 hours of play a complex rook ending emerged, in which Kramnik defended excellent for a well fought draw. This makes it 2 - 1 for Anand before the decisive last game on Sunday, 1 pm. 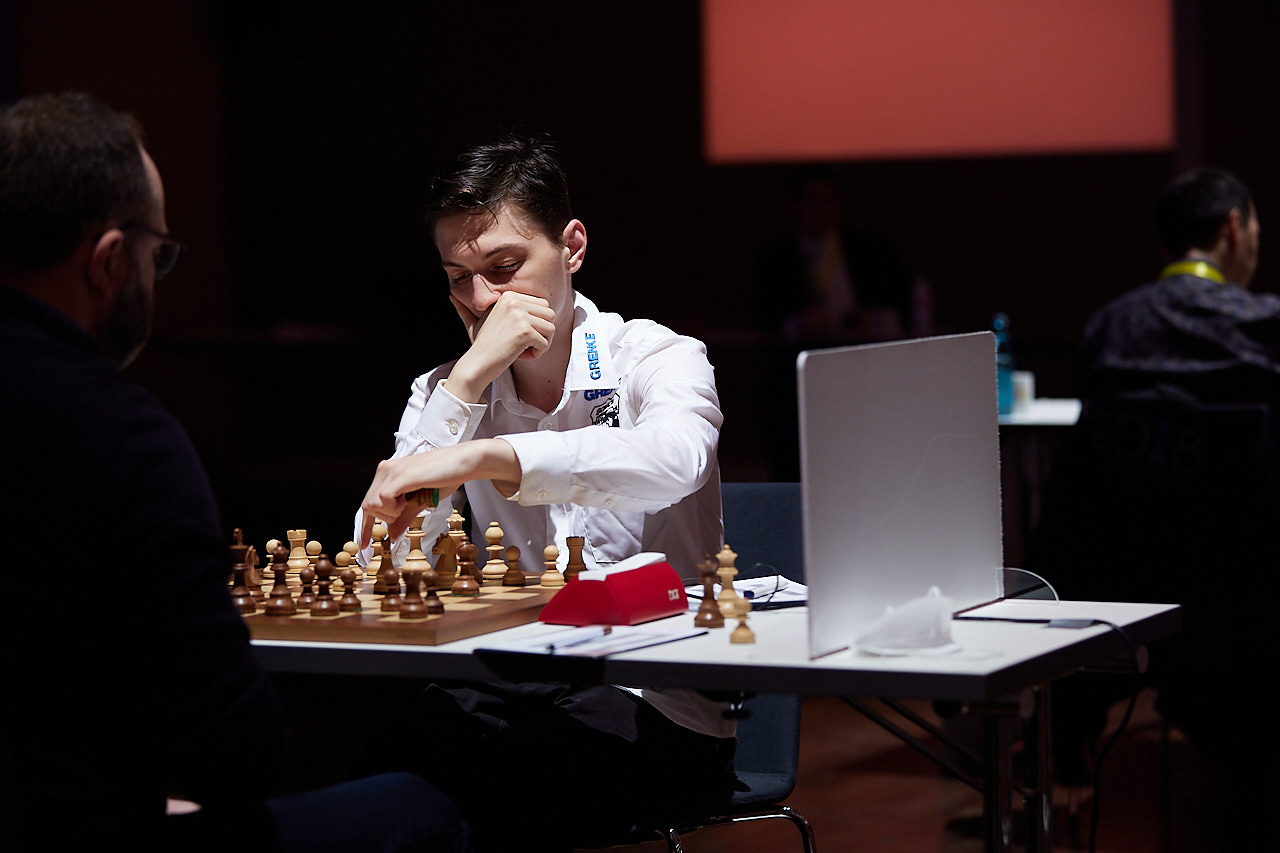 Four-way battle for the title in the German Grand Prix

In the Deutschland Grand Prix of the 48th International Dortmund Chess Days, Dmitrij Kollars was able to convincingly defeat Pavel Eljanov, who had been leading until then, and thus took the lead. The young German grandmaster was then caught on the wrong foot in the afternoon round by the experienced former FIDE World Champion Rustam Kasimdzhanov: In a well-known variation of the Scottish opening Kollars was thus quickly in a bad position and lost the game. This allowed Eljanov and Fridman to catch up with draws, so that these 3 players are now at the top with 5 points each. Vincent Keymer lurks close behind with 4.5 points. Local hero Fridman won a technical rook ending against Andreas Heimann in the morning round, while Vincent Keymer first won two pawns and then the game against Mateusz Bartel with Black. The 16-year-old has thus reached the magic ELO mark of 2600 in the live rating.

Table in the German Grand Prix:

Pairings of the last round:

The Online Open in "No Castling Chess" which was planned as a substitute for a big local Open, came to an end today in the final on Saturday. Elo favourite Krishnan Sasikiran (2647) from India won the tournament with 6 points from 7 games in a tight tournament.

A report on the tournament, which started with over 300 participants, can be found online:

Two norms in the Sportland NRW Cup for young talents

Ruben Gideon Köllner leads the round robin tournament for the best German youth players in the 48th International Dortmund Chess Days and has already secured a coveted IM norm one round before the end. This is his second norm, at the third he will be awarded the title "International Master". The strong playing Romanian Women's Champion Alessia Ciolacu, meanwhile, has already secured her first WIM norm one round before the end.

The current standings and all results can be found here:

In the Sportland NRW Girls Cup Melanie Müdder beat the leading Michelle Trunz with White today and thus has the best chances to win the tournament with half a point advantage one round before the end.

Live broadcasts can be found on the tournament website: www.sparkassen-chess-trophy.de.

Tomorrow, the decisive round in all four competitions will start on site at the Dortmund Westfalenhallen at 1 pm.